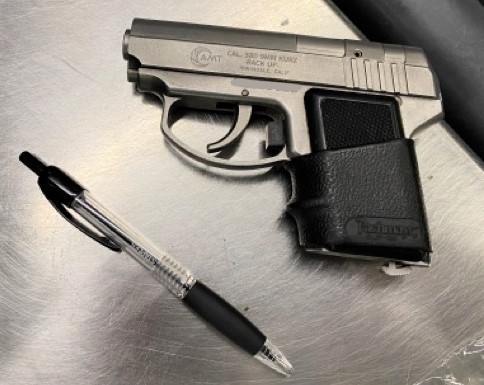 Transportation Security Administration (TSA) agents prevented a handgun from making its way aboard a plane at Milwaukee Mitchell International Airport on September 13. During the routine carry-on baggage check, a TSA officer spotted the image of a handgun on the x-ray. filter. The incident happened at around 11:20 a.m. and TSA officials immediately alerted the Milwaukee County Sheriff’s Office. A deputy intervened at the checkpoint, confiscated the gun, which was loaded, and issued a ticket.

“It is extremely disappointing that passengers continue to bring firearms to the airport checkpoint,” said Mark Lendvay, director of federal security for TSA Wisconsin. “Even when done unintentionally, it is not safe and can seriously slow down or stop security screening until the police resolve the incident.”

“Twice in less than a week, our officers have stopped individuals from carrying loaded guns on flights,” said Bob Allison, TSA federal director of security for Massachusetts. “To say you didn’t know the gun was in your bag is no excuse. Responsible gun owners know where their guns are at all times and do not make these kinds of reckless mistakes. Passengers traveling with firearms should ensure that they are properly packed in their checked baggage.

Meanwhile, the number of firearms arrested at Pittsburgh International Airport this year has already exceeded the number detected in 2020. TSA agents have prevented a resident of Butler, Pa., From bringing his gun. 9mm handgun on an airport flight on September 14, marking the 22nd pistol taken at the checkpoint this year. 21 guns were detected at the Pittsburgh International checkpoint last year. When TSA officers spotted the gun in the checkpoint x-ray machine, they alerted Allegheny County Police who then confiscated the unloaded gun and temporarily detained the man for examination.

The next day, TSA agents at Richmond International Airport prevented a Mechanicsville, Va. Man from carrying a 9mm handgun loaded with 15 bullets on his flight. The weapon was detected in the x-ray machine among the traveler’s carry-on baggage at the security checkpoint. The TSA alerted the police, who responded at the checkpoint, confiscated the handgun, and issued a summons to the man. In addition to being cited by the police, he also faces a heavy federal civil financial penalty for bringing a loaded weapon to an airport security checkpoint.

TSA officers at Redding Municipal Airport discovered two loaded firearms on September 16 during routine x-ray screening of carry-on baggage at security checkpoint. The first gun discovery took place at 7 a.m. when a TSA officer saw a picture of a gun on the x-ray screen. The gun, the Smith & Wesson MP40 handgun, caliber .40, loaded with six rounds, was discovered in the carry-on baggage of a male passenger with a ticket to the Los Angeles International Airport.

The second gun find occurred at around 2 p.m. when a loaded .38 Caliber Charter Arms gun loaded with five rounds was detected in the carry-on baggage of a female traveler on her way to the Hollywood airport Burbank.

In both cases, screening was stopped and the TSA informed airport law enforcement, who responded to the security checkpoint. There is no evidence that these two incidents were linked. The two travelers were questioned by the police and authorized to continue their journey. These are the second and third finds of firearms by TSA officers at the airport so far this year after a loaded firearm was arrested by the TSA on August 18, 2021. One gun was arrested at the airport in 2019, and none were found in 2018 or 2020, making 2021 an unprecedented year for gun detections in Redding.