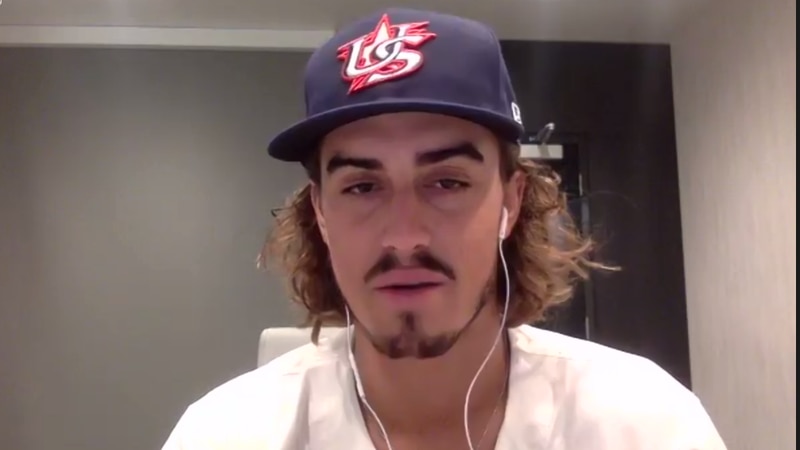 ST. PETERSBURG – Joe Ryan and Shane Baz have spent a lot of time together in recent years.

The two up-and-coming Rays prospects first met in the pedagogical league after the 2018 season, did some spring practice together, and briefly crossed paths at Class A Bowling Green in May 2019.

They began cohabiting together during the 2020 alternate site workouts in Port Charlotte. They did it again last spring and the following month before the minor league season started. And again in the last five weeks after Baz was promoted to join Ryan in the rotation at Triple-A Durham.

Now they’re ready to take their buddy on the road, departing for Tokyo on Wednesday as teammates on the US Olympic baseball team.

“It’s like, constantly, we’re together,” Ryan said. “And now he’s here again. And so it’s good to have it. … This is a special opportunity.

Baz said, “This is going to be awesome.”

Ryan, 25, is the older and more experienced voice of the dynamic duo. He has traveled the world before, playing for the United States in the June qualifying tournament in South Florida and receiving advice and guidance from 1998 Olympics skier Bob Ormsby, a friend. longtime family.

Baz, at 22, has wide eyes and asks a lot of questions. He said his biggest concerns were doing laundry before Wednesday’s departure and wondering how he would handle the long flight.

Being together will improve what the two already anticipate to be an incredible and defining experience, even with coronavirus issues and protocols limiting much of their off-field activities.

“The greatest honor I can do on a baseball field, honestly, is to put on red and white and blue and try to win a gold medal for your country,” Baz said. “So this is really special.”

They should feel like that, say a few current Rays who have played for the U.S. team in lesser stages before.

“Carrying the United States across your chest just means a little bit more to represent your country,” said outfielder Brett Phillips, who competed in the 2015 Premier 12 World Tournament in Taiwan and Japan. “It’s hard to explain wearing it. It is an honor.”

“It’s just a different feeling,” said reliever JP Feyereisen, who pitched at the 2019 Premier 12 tournament in Mexico and Japan. “Obviously the big leagues are the big leagues, but basically playing for the pride of your country is an incredible thing.”

It’s the one that starts, Feyereisen said, even before the game, when the players are lined up and the anthem is played. “It gives you different chills,” he said.

Ryan and Baz, who are expected to be used as starters by manager Mike Scioscia, say they are eager to experience it firsthand, starting with the Opening Ceremonies, which they plan to attend.

They understand that due to protocols they will not have the full Olympic experience, such as having loud crowds cheering them on or against them hanging out with players from other sports (Ryan has a water polo teammate at the high school in the US team) or see other events. Sightseeing in Tokyo is also out, although they still hope to get a taste of some of the native food specialties.

“I went through the set, ‘Go to the hotel, go to the field, go back to the hotel and do nothing else,” Ryan said. “So not ideal. Definitely not for my personality and the way I used to do things.

“But at the same time, it’s like that. I’m lucky enough to go to the Olympics and go play, and I’m excited about it nonetheless. It’s gonna be different. It’s going to be unique. And yes, it’s gonna be a good time.

Sign up for Rays Report’s weekly newsletter to get new perspectives on the Tampa Bay Rays and the rest of the majors from sports columnist John Romano.

Ask COVID question, will Alabama students have to wear masks for fall | Ask a question about the Covid-19

Pants are the new outing look