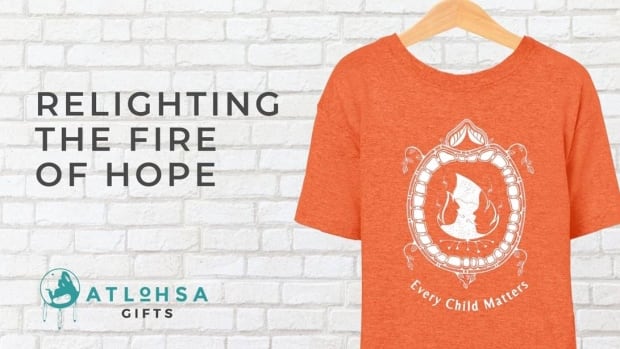 Orange shirts are flying off shelves as Londoners answer the call to wear them on Canada Day to raise awareness of the lasting impact of residential schools and stand in solidarity with the Indigenous community.

“We’re printing nonstop,” said Adam Sturgeon, operator of Rezonance Printing, which works in partnership with Atlohsa Family Healing Services and a local Indigenous artist to release shirts, with the proceeds going to a good cause.

Across Canada, there have been growing calls to cancel Canada Day celebrations in light of revelations of hundreds of anonymous graves at former residential schools in Saskatchewan and British Columbia.

Atlohsa’s shirts were designed by Hawlii Pichette, a Cree Mushkego artist and illustrator (Treaty 9). The design on the shirt features a flame in the center that contains the silhouette of two children’s faces, representing those who were forced to attend residential school, their spirit and their experience, Pichette said.

The flame is surrounded by the outline of a turtle, which represents the truth.

“I chose to use this because I feel like the Every Child Matters campaign is about raising awareness. And awareness, of course, is the truth,” Pichette said.

On the back, the shirts read “Awareness Inspires Action”.

“I think it’s important [for people to wear these shirts]but it’s crust on the surface, ”said Sturgeon, who is from the Chippewa First Nation of the Thames. “Wearing orange is something we have to do to start showing solidarity, but action is what we are looking for.

“I don’t want people to get caught up in the spread of responsibility and say, ‘OK, I have my orange shirt, I’m fine.’ This is just the beginning.

“I think it’s really great that a collective awakening is happening right now, but I think it’s important that the conversations continue… We need the non-Indigenous community to share their voice, stand up, write to our deputies and be our allies. “

“I have heard from their lips the atrocities of things that have happened to them in the past and it reverberates,” she said.

However, she finds some solace in feeling that a positive has come out of the latest findings, which she considers anything but a coincidence, and is the fact that it happened at a time when she firmly believes. that people are ready to show their support for aboriginal people. community.

“I feel like people are ready to listen now,” Lees said.

“These children represent the seeds of knowledge, and they still do their grave work. They were dug up when they were, so they can help us have a platform to communicate to. a time when people could listen, hear and help. ”

As of Monday, more than 2,000 shirts had been sold, quadrupling regular sales, Lees said.

Their sale is part of a larger campaign called Rekindling the Fire of Hope, which aims to inspire awareness, action and change.

All proceeds will go to the agency’s Mino Bimaadiziwin program, which supports children, youth and caregivers who have experienced violence and unhealthy relationships at home or in the community.

While people can still order their shirts and have them ready for pickup on Wednesday, Lees said people can shop this summer for Orange Shirt Day in September.

Lees said those looking for ways to further support the community can do so by researching, learning about local Indigenous communities, and supporting Indigenous businesses and raising awareness, whether by talking to neighbors or by writing to local politicians.