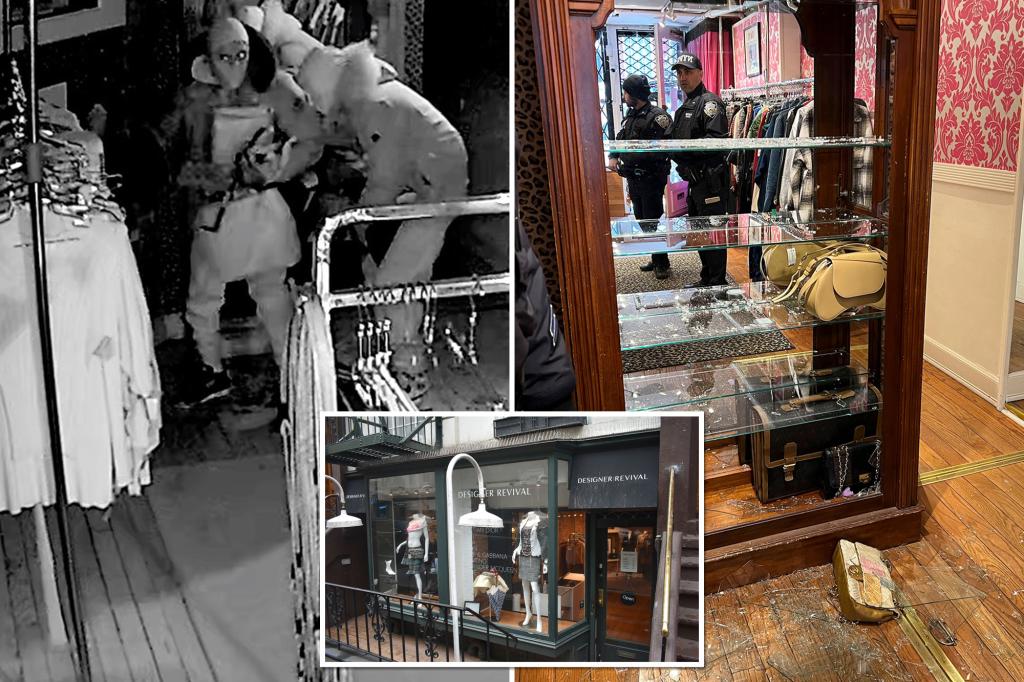 Designer Revival, an upscale Upper East Side consignment boutique selling second-hand Chanel, Gucci, Hermes and other brands, has been a regular target of shoplifters, smashes and late-night seizures and credit card fraudsters, according to its fed-up owner, Tiffany Keriakos, who said the crime put her business at risk.

Last month, a scammer paid for $25,000 worth of items with a stolen credit card, and the store’s insurance wouldn’t cover the losses, Keriakos said.

And at 3:30 a.m. on March 30, three burglars smashed the padlock on the security shutters with bolt cutters, smashed the glass front door and stole $30,785 worth of designer handbags in 30 seconds, according to police and security footage.

Other thieves defiantly enter the store on East 81st Street near Second Avenue during office hours. One left with a $1,500 Gucci handbag under his winter jacket in December and returned in January to do the same.

But an eagle-eyed worker spotted him and alerted co-worker Nora Hatch.

“At first I was just trying to be nice and open the door for him, but then my colleague said, ‘Stop it!’ so I grabbed him and pulled him back down the stairs,” Hatch said. “I was able to get the bags and send them back to the store.

The same man surprisingly returned in April, slipping a purse under his coat.

This time, store manager Katrina Feil called 911 as she followed the repeat offender to the door. She followed him for 10 blocks and said she tried to ask two police officers on the street for help, but they told her to wait for 911 responders.

“They didn’t walk with me. They just stood there and acted like I was crazy,” she said. “I get it. They’re busy. That’s great. But it was very disappointing, to say the least.

In February, police arrested two men linked to a 2019 robbery at the store. During the robbery, two men posing as shoppers demanded to see goods in a shop window, then pepper-sprayed an employee in the face before fleeing with four Chanel bags worth around $16,000, police said.

Consignment stores in Soho and Madison Avenue have also been affected in recent months.

Keriakos and Feil said they fear the thefts could eventually put Designer Revival out of business.

“I am on my third insurance company due to claims I have had to submit over the past seven years of owning this store,” Keriakos said. “Over the past two years, we’ve lost nearly $150,000 worth of merchandise.”

Since Designer Revival is a consignment store, they don’t technically own any of the store’s items. Each time a part is sold, the store and the sender earn money.

“People want to feel safe when they bring their high-value items to the store, so if they think their items are going to be taken, it can make us look untrustworthy,” she said. “On the other hand, we’ve had a lot of support from shippers and some new shippers who just know getting robbed is part of having a store in New York and have brought us more inventory.”